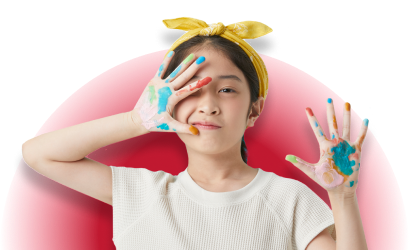 WHAT IS OTITIS MEDIA WITH EFFUSION (OME)?

OME, otherwise known as ‘Glue Ear’, is the collection of fluid in the middle ear. It occurs commonly in children, and it has been quoted in studies that up to 60% of children have at least one episode by age 6. It frequently happens after an upper respiratory infection (flu), and in the majority of cases, it resolves by itself. The length of time for the resolution varies and may take up to 3 months. Studies have also shown that 95% of children would have complete resolution without any surgical intervention in 3 months.

WHAT ARE THE SIGNS AND SYMPTOMS OF OME ?

Older children often complain of earache and hearing loss. Younger ones may become fussy, sleep poorly, and often pull and tug at the ear. However, most of the time, the children are unaware of the hearing loss. The caregiver may notice that the child turns up the volume of the radio/TV or that he/she is not attentive during normal conversation. Teachers may also complain that the child is inattentive during lessons or doing poorly in school.

HOW IS OME DIAGNOSED?

There are several ways of diagnosing OME. Very often, on clinical examination, the eardrums are found to be dull, and sometimes bubbles of air may be seen behind them (Figure 1). An audiogram typically shows mild to moderate conductive hearing loss. A tympanogram may also show a type "B" (Fig. 2) tracing as opposed to a normal type "A" (Fig. 3). 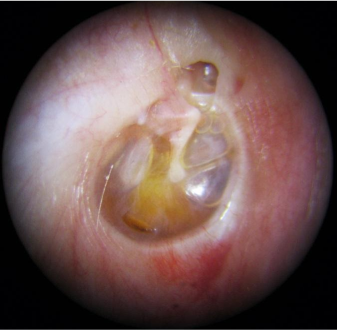 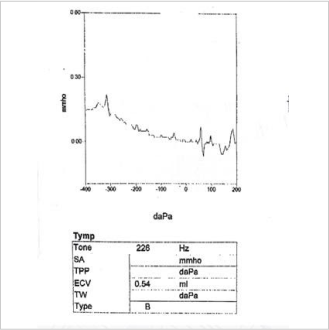 Figure 2. Type B tympanogram suggestive of fluid within the middle ear resulting in poor conductivity 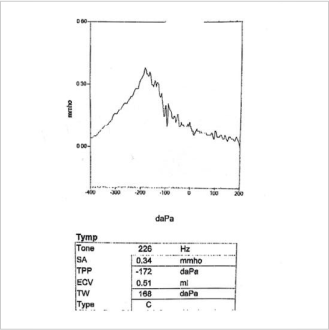 WHEN SHOULD IT BE TREATED?

When symptoms of hearing loss persist, particularly at a time when a child is learning to speak, medical evaluation and treatment are recommended. Hearing loss is the single most important cause of a child having delayed speech.

To improve eustachian tube function, a variety of medications may be used. The most common are antibiotics, decongestants, and nasal sprays (if a nasal allergy is present). If this fails, surgical options will then be explored. For children, the operations performed are Myringotomy & Tube insertion (M&T) with or without adenoidectomy.

M & T is done under general anaesthesia as day surgery. This simple procedure generally takes about 15 minutes and involves making a cut on the ear drum and placing a tiny ventilation tube through it. This then allows ventilation of the middle ear. Possible admission to the hospital is required only when adenoidectomy is performed in the same setting. Your child may be required to fast overnight (no food or drink after midnight) before the operation. For a younger child, a shorter period of fasting might be sufficient, depending on the anaesthetist’s assessment.

The doctor should be informed if your child has fever and cough just before the surgery. The surgery might be postponed if the child is found to be unfit for surgery. If the child has any history/family history of bleeding disorder or any previous problems with anaesthesia, it should be brought to the doctor’s attention.

The child might still be sleepy and have vomited from the effects of general anaesthesia. After a few hours, he/she will be allowed to drink water. Eating will resume depending on the child’s recovery. An immediate improvement in hearing should follow after surgery.

There is no dietary restriction and a normal diet and oral hygiene should resume.

We would like to review your child 2-4 weeks after the surgery. Do keep your appointment with the doctor as the follow-up care is important to ascertain the extrusion of the tube and if there is a recurrence of middle ear fluid.

The ventilation tubes placed through the eardrum will be automatically expelled in 6–18 months. This might need removal by the doctor from the ear canal in the clinic during a follow-up visit.

If the child experiences purulent ear discharge or pain after the operation, please give our clinic a call for an early consultation. This may occur when the child has an upper respiratory tract infection sometime after surgery and with a patent and functioning grommet tube.

Keep the ears dry, as water in the middle ear increases the chance of infection. Do not allow shower spray to be directed into the ears. Older children will still be able to swim, but this should be done while wearing good earplugs. Placing the head underwater is to be avoided. Children under the age of six should not dive or swim. In the event of an ear infection where there is pus discharge from the ears, a medical opinion should be sought.

Usually, post-operative reviews are given within 1 month. Please keep your appointment as follow-up care is important to ascertaining extrusion of the tube and if there is a recurrence of middle ear fluid.